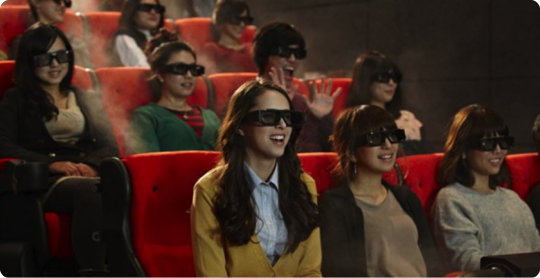 Year-on-year, with the sheer glut of blockbusters releasing on a more frequent basis, cinema on-screen advertising has given brands an unparalleled opportunity to be as creative as the films that follow them.

The more powerful and effective a cinema campaign, the greater the emotional response from an audience!

1. Encourages an active/assertive viewer experienceAudiences can’t just let a 4D movie happen to them; the overall experience demands that they be engaged in an active manner with what’s happening on screen. Similarly, 4D cinema campaigns guarantee audience engagement from start to finish.

To illustrate how the Cadillac V-series is ‘The Perfect Storm’, Leo Burnett created a 4D cinema campaign – working closely with MVM and VOX Cinemas, which screened at VOX City Centre Deira and Mirdif City Centre.

First, a 3D execution of the TVC was produced in order for viewers to virtually enter the eye of the storm. Then, with the assistance of large industrial fans installed on the walls of the cinema, the audience was able to feel the power and actively engage with the commercial.

2. Stimulates greater interest in a product, service or experience

To immerse the audience in the dazzling world of imagination, pleasure and 5-star luxury – ‘Check Into Another World’, Atlantis together with a Dubai based creative agency that worked closely with MVM and VOX Cinemas, utilized 4D cinema technology in the campaign that screened at VOX City Centre Deira and Mirdif City Centre.

Using a gentle breeze to delight, refreshing scents (ocean and gardenias) to relax and revitalize, and flying, rolling and bouncing seat motions to create a sense of joy, the campaign transported audiences to discover the luxury service and in-house experience extended to guests and visitors of the Atlantis.

3. Subconsciously triggers the element of ‘want’

Taste and smell are separate senses with their own receptors, yet they are intimately entwined to produce some of the basic sensations of everyday life. As the saying goes: “If you smell it, you will want to taste it.”

For brands launching a product with a new flavour, 4D cinema technology can help ‘pack a punch’ with the feature of smell.

Quite a few movies are still made for the purity of the storyline, acting and directing capabilities. However, the movies that perform relatively well at UAE box office belong to action, adventure and animation genres – which of course, work well with 4D cinema technology.

Therefore, 4D most often appeals to advertisers with an aim to engage an audience through means of sheer action and adventure. Why? Because the overall experience is live, engaging, adrenaline pumping and fun!

In the face of an already crowded off-road segment, and confronted with the extreme challenge of launching the 2014 FJ Cruiser Extreme, Toyota together with GMASCO (working closely with MVM & VOX Cinemas) executed a 4D campaign – shortlisted at Dubai Lynx 2015, to achieve stand-out awareness of the many wonders of the formidable 4×4.

A region-first 4DX commercial that screened at VOX Cinemas City Centre Deira and Mirdif City Centre – alongside blockbuster movies Need for Speed and Fast and Furious 6. The ad utilized augmented environment effects such as seat motion, wind, rain, fog, lighting and scents to supplement the action sequences in standard video format – thereby giving the audience the feeling of every bump, splash and win… right in their seats!

Over recent years, more and more cinema operators in the region have invested in cutting-edge cinema concepts and technology (3D, 4D, IMAX) – pushing the boundaries of cinema-going.

4D is the next step in the movie-going evolution – engaging audiences to be part of the adventure whilst experiencing the entirety of virtual realty. This has also offered advertisers new and exciting formats of cinema advertising – all guaranteed to create greater brand impact.

It’s time to free yourself from the confines of advertising and explore the possibility of aligning your brand with a 4D movie releasing over the months ahead.

MVM is the official cinema advertising partner of VOX Cinemas with 4DX screens at City Centre Deira, Mirdif City Centre, Mall of the Emirates and Yas Mall (Abu Dhabi), and Reel Cinemas with an MX4D screen at The Dubai Mall.
Contact a member of our sales team for more details.