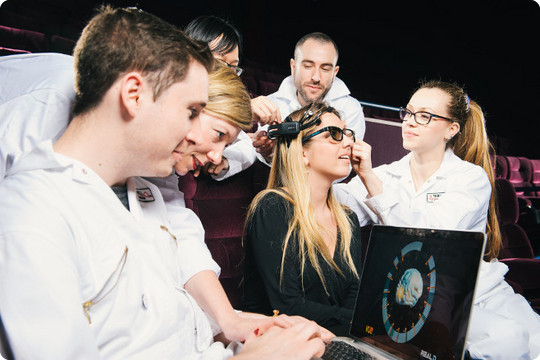 VUE Cinemas in the UK and Ireland commissioned leading scientists from the Thrill Laboratory and neuroscientist Patrick Fagan from Goldsmiths to undertake a phenomenal 2D vs. 3D public study in 2015.

Moviegoers participated in a scientific test at VUE Piccadilly to understand the effect 3D films had on the brain.
The study demonstrated that watching films in 3D gives a mental boost, enhancing speed of reaction and the brain’s ability to process information.

Using brain monitoring headsets which monitored 14 different parts of the brain – each part of the brain indicating the different ways in which we process what we see on the screen, how we feel emotionally, and the kind of things we want to so (scream/jump out of the seat). The collection of these bits of information was fed into computer technology were scientists were able to work out levels of excitement, engagement, and ultimately levels of enthrallment the audience experienced in 3D.

The audience reflected a good mix – men, women, older and younger people who experienced and consumed 3D content differently. 3D films excited everybody – in slightly different ways. On the whole, everybody enjoyed a unique and intense experience.

VUE is one of the leading cinemas operators, owning the most modern state-of-the-art multiplex cinema circuit in the UK and Ireland – with almost 800 screens at over 80 cinemas.

Interested in playing your ad in 3D? MVM also offers 3D production and UP conversations from 2D to 3D.