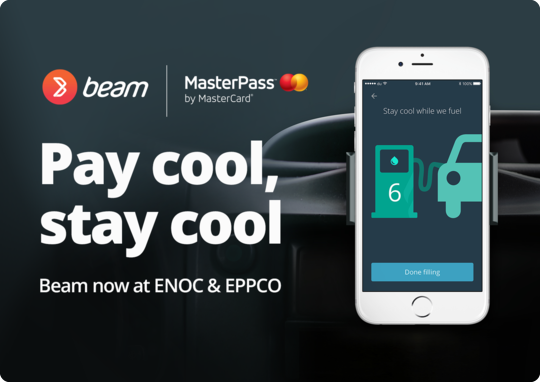 The summer in Dubai just got a whole lot cooler.

Hold on! Don’t rush to check the weather on your phone.

We’re talking about a brand new experience delivered by Beam that spares you from roasting when fueling up at a petrol station.

That’s correct. The unique mobile app for payments in the UAE – Beam Wallet, is now accepted at all ENOC and EPPCO petrol stations.

How cool is that?

Beam is the leading mobile payment platform in the UAE that lets users (a.k.a. ‘Beamers’) pay using their smartphones and earn rewards.

Established in 2012, Beam has rapidly grown as a popular payment method. Through its partnerships across different retail categories, it has rapidly moved from a technology used by early adopters to a mobile wallet used by over 300,000 people. Beam users are able to shop at over 3,000 outlets in the UAE, and the company is now set to become the leader in the mobile commerce space – not only in the UAE and the wider Middle East, but also internationally (already launched in Sweden and soon to be launched in Australia).

In March 2016, Beam introduced mobile payments through the BLE technology at petrol stations, and this month they launched the #PayCoolStayCool campaign to drive ‘awareness’ about its services at all ENOC and EPPCO petrol stations.

So, how did Beam engage and drive awareness of this campaign?

Beam created the dedicated website www.paycoolstaycool, in which it provides all the details on how to fill up using smartphones at the petrol station.

1. Pull up to the fuel pump and ask the attendant to fill it up with the requested amount

2. Select the pump number that matches the pump fuelling from

3. When the attendant has placed the nozzle back in the pump, wait around five seconds and tap’Done filling’

4. Tap ‘Pay’, and once the payment has been confirmed, simply drive away

Additionally, Beam advertised the campaign on radio, outdoors (bridge banners and billboards on Sheikh Zayed Road) and via their social media platforms – Facebook, Twitter, Instagram and YouTube – which included strategic ad placements across the respective platforms.

The campaign was structured in two phases and will air for a total of six weeks:

The teaser commercial screened from July 21 to August 3 during the commercials/trailer strip. Moviegoers were led to think it was a new movie releasing soon on the big screen.

The reveal movie started screening on August 4 and is presently screening at the respective VOX Cinemas, again during the commercial/trailer strip.

What made Beam select cinema for this campaign?

Beam included cinema in the media mix of this campaign because the medium is an undeniable resource to foment the concept of the #PayCoolStayCool campaign – ‘movie trailer’, and because it strategically complements the company’s on-going investment in outdoor advertising, radio and digital platforms – to ensure higher reach and brand recall.

Another great example of a brand utilizing cinema for a campaign and being as creative as the film that follows!