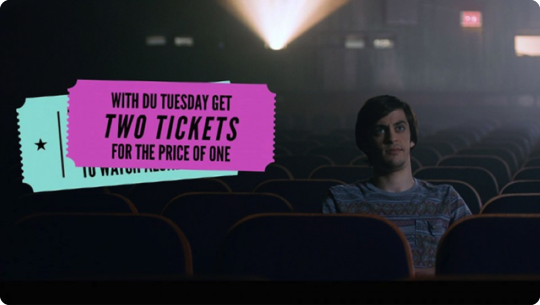 Leo Burnett Dubai’s ‘du Tuesday’ work has won a grand prix at the Dubai Lynx, gold at Cannes, a yellow Pencil at D&AD, and even a rare Black Cube at the Art Directors Club in New York.

du – who has a longstanding partnership with VOX Cinemas, offer people a mid-week taste of the weekend by offering ‘two tickets for the price of one’. To communicate the offer, the campaign – crafted by Leo Burnett is based on true human insights about movie genres and entertainment.

The results was a series of unique ads that bring out the different elements of what makes a movie much more enjoyable when watched with a friend.

In terms of awards, the ‘du Tuesday’ ad is arguably the most lucrative campaign ever from the Middle East and North Africa. It is also a beautifully crafted expression of the relationship between UAE telecom du and its agency, Leo Burnett MENA.

“The origins of the ‘du Tuesday’ work can be traced back to a few ordinary people doing extraordinary work. It is a story of many stories that allowed a seemingly small project to grow into something much bigger than originally intended,” said Kamal Dimachkie, Executive Regional Managing Director at Leo Burnett, in an interview with Campaign UK.

“It started with interesting scripts developed by Leo Burnett Dubai’s creative team. The selection of the director proved game-changing, and (Leo Burnett group communication director) Saad Yusuf’s question – ‘Will these win people over?’ – propelled the ideas to a different level.”

He added: “History was shaped through edgy work that made everyone uncomfortable. It wasn’t your usual brand communication; it was different, darker, surprising and full of twists. This is what you get when you bring in a talented director who knows how to add value to both content and craft – what Ali Ali and Maged Nassar helped bring.”

“This was also a story of parked egos. Testament to the agency and creative team is their respect for creativity and unwavering belief in the power of ideas – those they create, then entrust in the hands of people who can help deliver this purpose.”

According to Dimachkie, Ahmed Zaki, du’s Senior Director Live Communications – Commercial, showed courage in adopting the work created by the agency. “Instead of subjecting the ideas to ‘death by a thousand cuts’, he escalated the approval process all the way to the top.”

For his part, Zaki said: “What I value the most about Leo Burnett is that they provide us with… good creative recommendations and they have passion and integrity for what they do.”

This is truly a story of a new-age collaboration between du, Leo Burnett, and some outstanding directors.

As a result of the long-standing partnership du has with VOX Cinemas, the telecom operator schedules all ‘du Tuesday’ campaign ads through MVM. du has also been a long-standing client of MVM where they book spots for all other du campaigns through MVM.

Here are some of the award-winning ‘du Tuesday’ commercials screened at VOX Cinemas across the UAE: