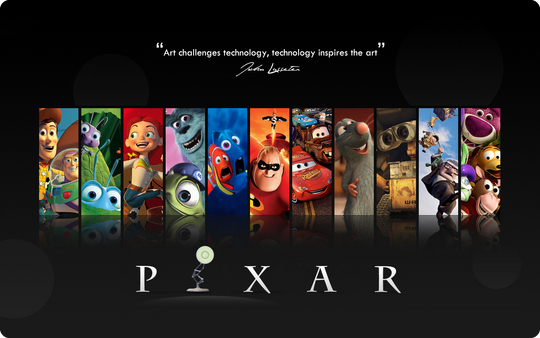 What can the advertising industry learn from the Disney-owned animation studio – which is known for its storytelling power? Pixar offers five secrets to the company’s success, which advertisers can learn from.

And of course, there’s no better place than cinema to tell a story!

Matthew Luhn, Pixar’s story supervisor and self described ‘king of gags’, has spent more than 20 years working his magic on films including the Toy Story trilogy, Monsters Inc., and Finding Nemo, and definitely knows a thing or two about storytelling.

Watch any of Pixar’s 17 movies and you’ll see a storytelling masterclass in action! The films make the process look easy, but pull back the curtain and you’ll find an intensive four-year process that involves thorough research, consultations with experts and the use of data to enhance creative expression.

Following his appearance at a Cannes panel alongside data specialist Quantcast, Luhn met Campaign UK to share ‘five creative secrets of storytelling’ from the animation studio.

At Pixar, the story always comes first. When choosing a new film to produce, a director pitches three ideas to a cross-disciplinary group of staff members that include the Chief Creative Officer, Merchandising, Finance and Technical Executives. All provide feedback, but the final say on which story to make will be from the Creatives.

Luhn says: “Pixar flipped the rules of how it usually works in Hollywood, where the people that make the final creative decisions aren’t the people who went to business school. Instead, we created a culture that empowered the artist.” “Improving the quality of the product is important, but working in a company where the best idea wins motivates staff to think creatively.”

2. Obsess over your audience connection

Having finalized the story, Pixar works towards ensuring the story engages as many people as possible – because it has to recoup huge production costs. “Animated films cost more than almost any kind of film, including live-action movies” Luhn explains.

“Which means, you are going to have to sell a lot more cinema tickets.”

Pixar’s stories play on universally shared emotions such as fear and desire. For example, every Toy Story film focuses on the fear of being abandoned. The goal is to create a story that truly connects with the audience – enabling them to empathize with the characters and share their emotional journey.

Pixar relies on research into human behaviour to create the strongest connection between the characters and their worlds and the audience. As Walt Disney once said: “We cannot do the fantastic things based on real, unless we first know the real.”

3. Use data to aid creative expression

Ratatouille – sending creatives to a French cooking class to learn the correct way to cut a carrot.

Toy Story – speaking to toy collectors to understand the correct terminology and the feelings that drive them.

Even more detailed data comes into play when drawing a film’s character and emotions. For example, have you found yourself rooting for a robot in Wall-e or getting upset by a fish in Finding Nemo? That’s probably because Pixar gives their characters ‘identifiable human traits’.

“We want to make sure the expressions on a character’s face are matching up with the same expressions we make as people,” Luhn says. Pixar consults experts including psychologists and cultural anthropologists from around the world: “So no matter who sees our film, everybody can relate to a character.”

During the development face of the story, animators usually look at their own faces in the mirror to capture more realistic facial expressions. Small movements – the movement of pupils for instance, are actually ‘top of the list’ of what makes a character relatable.

Luhn says: “with the new data we use now, we can make even more subtle expressions that make a more successful connection with the audience. It just helps us to do our job a tad better.”

4. Get feedback – but from the right people

Pixar is careful about who can provide feedback and how it interprets the findings.

For much of its creative process, they only ask for feedback from other filmmakers. The whole company is invited to regular screenings of the storyboards, but only asks the general audience for their opinion six months before a film is launched.

Pixar is more interested on the reactions of the general audience, and not so much on what the say. Did they get bored? Did they laugh in the right places? According to Luhn, the danger in asking for feedback from a general audience too early is that they will tell you what they want to see in the film. If you try to give them what they want, “that’s how you make a really bad movie”.

5. Fail faster to the best idea

“The great creators that have existed on this planet are the ones that have taken chances,” Luhn says.

But making mistakes can be expensive. “Creating great stories is all about eliminating the bad versions to get to the good ones,” he continues. “That means you have to be comfortable with failing, so before your money and time run out, you have the best possible idea or product to share with the world.”

Aside from paying incredible attention to detail, Pixar also has a wider goal, which is to make people feel good. As Luhn’s teacher told him on his first day at art school, you know you are an artists if you look at life and believe it could be better. And that’s a philosophy he has carried with him throughout his life at Pixar.

“Pixar doesn’t just want to make films that reflect reality. We want to make them a fantastical version of what it could be.”

And of course, like movies, brands too are stories and there’s no better place than cinema to tell them.

Here are some reasons why:

Cinema provides the most powerful medium to impact captive, attentive and engaged audiences with audio-visual storytelling.

Cinema typically caters to a young and affluent audience with high disposable incomes.

The cinema footprint in the UAE is large (approximately 53 locations and 439 screens – out of which MVM covers 29 locations and 287 screens) – ushering large audiences for new blockbuster releases throughout the year.

Over recent years, more and more cinema operators in the region have invested in cutting-edge cinema concepts and technology (3D, 4D, IMAX, Barco Escape) – pushing the boundaries of cinema-going. This in turn affords advertisers new and exciting formats of cinema advertising – guaranteed to create greater brand impact through storytelling.

MVM offers advertisers flexible on-screen advertising durations, which range from 30, 45, 60, 75 and 90 seconds. Therefore, with cinema, advertisers have the option of delivering longer and more compelling brand stories that aren’t subject to stringent slots.

It’s time you freed yourself from the confines of advertising! Create powerful brand stories and align your brand with cinema advertising – an unmatchable medium for storytelling.