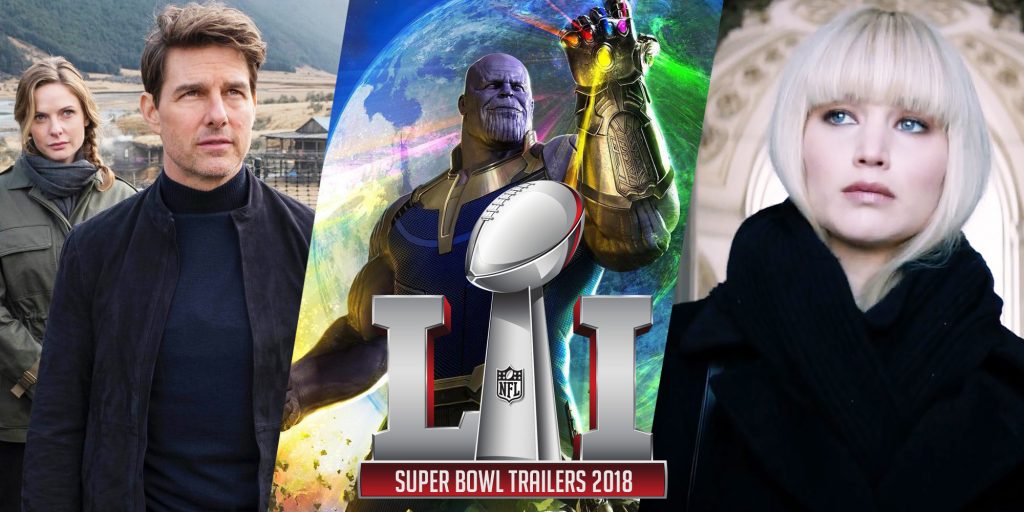 The Super Bowl is one of the most-watched events on US television, so it’s not a surprise that movie studios consider it a prime time to premiere trailers for upcoming blockbusters.

This year’s Super Bowl was no exception. Trailers and teasers for Solo: A Star Wars Story, The Cloverfield Paradox , Mission: Impossible — Fallout, Avengers: Infinity War, and more all premiered during the big game.

Here are the trailers that aired during the game for your viewing pleasure:

A troubled production (the original directors Phil Lord and Christopher Miller were removed late in the game and replaced with Ron Howard) has meant that the publicity machine for the Han Solo origin adventure has started up at a rather late stage. But this first, impressive spot suggests that we might have been worrying for nothing. Tthis tease gives us a brief look at the stellar cast, including Woody Harrelson and Donald Glover, and some splashy action.

Can someone go check on Dwayne Johnson? Is he eating all right, sleeping all right, gym-ing all right? The mega-star is coming off a schedule that has him top-lining three major movies in the space of seven months, making him a completely justified candidate for the oft-used celebrity affliction of “exhaustion”. The third (after Jumanji: Welcome to the Jungle and video game-inspired actioner Rampage) is the oddly dated-looking Skyscraper, a film that would have starred Arnie or Sly back in the late 80s. That final stunt does look like quite the doozy though. Tom Cruise will be furious.

After his failed Dark Universe non-starter The Mummy, Tom Cruise is feeling the need, the need for the Mission: Impossible franchise to return like never before. The series continues to be a reliable money-maker (the most recent entry brought in $682m worldwide) and for the sixth instalment, Cruise is hoping his high-octane showing off will at least temporarily catapult him back to the top. The first trailer looks like more of the same, with some new recruits (hello, Angela Bassett and Henry Cavill) but the final stunt, typically what sells each film, doesn’t look quite as incredible as in previous attempts. But maybe they’re saving it for later sneak peeks.

After the first trailer teased bigger dino action than ever before, this flashy new Super Bowl spot gives us a more horror-based look at the summer sequel. Chris Pratt and Bryce Dallas Howard are returning along with an island full of unwanted beasts and for those who worried the last preview focused on just the bigger action scenes, this one has some of the more intimate creepy sequences that made the original film so successful. The new spot also teases a new dinosaur created by scientists that looks rather nasty and also incredibly hateful of children.

Coming off the back of the divisive Darren Aronofsky horror/comedy/drama/satire/experiment Mother!, Jennifer Lawrence is shifting gears yet again for this spy thriller from her Hunger Games director Francis Lawrence. Trailers have previously shown off her surprisingly effective Russian accent and what looks to be a dark, sexual tone and tonight’s new spot doesn’t add a whole lot more but suggests another unusual role for Lawrence.

One of the night’s most anticipated trailers offered up a look at the overdose of superheroes that will be teaming up in the next Avengers movie. Black Panther! Doctor Strange! Spider-Man! The Guardians lot! It’s a dream for anyone who thought that Captain America: Civil War could have done with a few more major Marvel characters.

The night also saw a new look at the John Krasinski-directed horror film that stars himself and his off-screen wife, Emily Blunt, as a couple protecting their kids from monsters that use sound to attack. Like the first, longer trailer, this suggests great things with a creepy gimmick that could make this a hugely unsettling watch.

Don’t miss out on advertising alongside these blockbusters – guaranteed to be crowd puller across cinemas in the UAE, Oman, Lebanon, Egypt, Qatar and Bahrain.

Contact a member of our sales team for information on cinema advertising opportunities.

Sources: The Guardian and USA Today