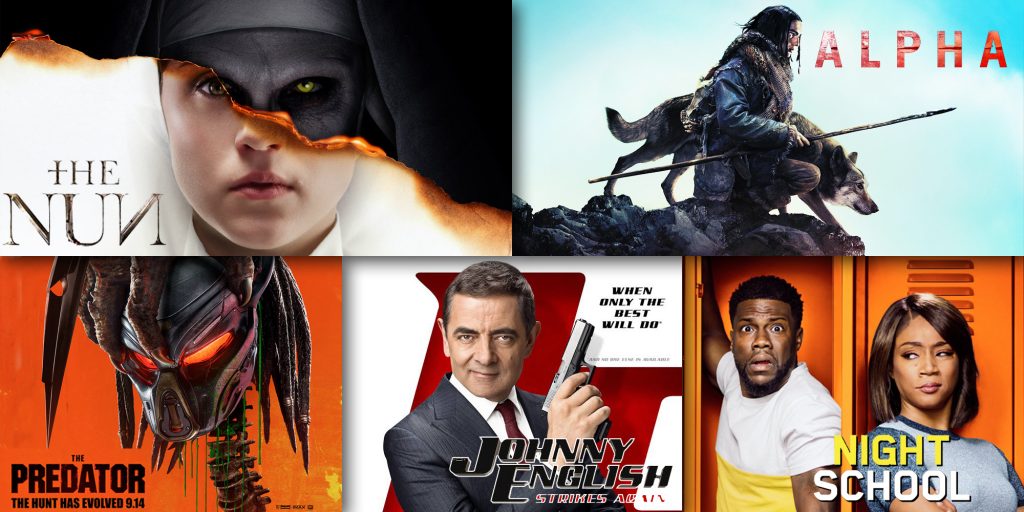 Cinema provides access to ‘hard to reach audiences‘, and has proven to ‘deliver captive and attentive audiences‘.

With a diverse slate of content to suit all demographics, there’s something for everyone this September:

A priest with a haunted past and a novice on the threshold of her final vows are sent by the Vatican to investigate the death of a young nun in Romania and confront a malevolent force in the form of a demonic nun.

In the prehistoric past, a young man struggles to return home after being separated from his tribe during a buffalo hunt. He finds a similarly lost wolf companion, and starts a friendship that would change humanity.

A 12-year-old boy embarks on a wild quest to help three tiny extraterrestrials return to their huge mother ship.

When a young boy accidentally triggers the universe’s most lethal hunters’ return to Earth, only a ragtag crew of ex-soldiers and a disgruntled science teacher can prevent the end of the human race.

After a cyber-attack reveals the identity of all of the active undercover agents in Britain, Johnny English is forced to come out of retirement to find the mastermind hacker.

A Yeti named Migo stirs up his community when he discovers something that he didn’t know existed – a human.

A man’s life takes an unexpected turn when he accidentally blows up his place of employment. Forced to attend night school to get his GED, he must now deal with a group of misfit students and a feisty teacher who doesn’t think he’s too bright.

The House with a Clock in its Walls

Ten-year-old Lewis goes to live with his uncle in a creaky old house that contains a mysterious tick-tock noise. When Lewis accidentally awakens the dead, the town’s sleepy facade magically springs to life with a secret world of witches and warlocks.

Sui Dhaaga: Made in India (Hindi)

An unemployed small-town man defies all odds and naysayers and starts his own garment business. It is a heart-warming story of pride and self-reliance, rooted in the heart of India.

Need a campaign that delivers a guaranteed audience? Then cinema is the place to be!

Contact a member of our sales team for more information on upcoming cinema advertising opportunities.