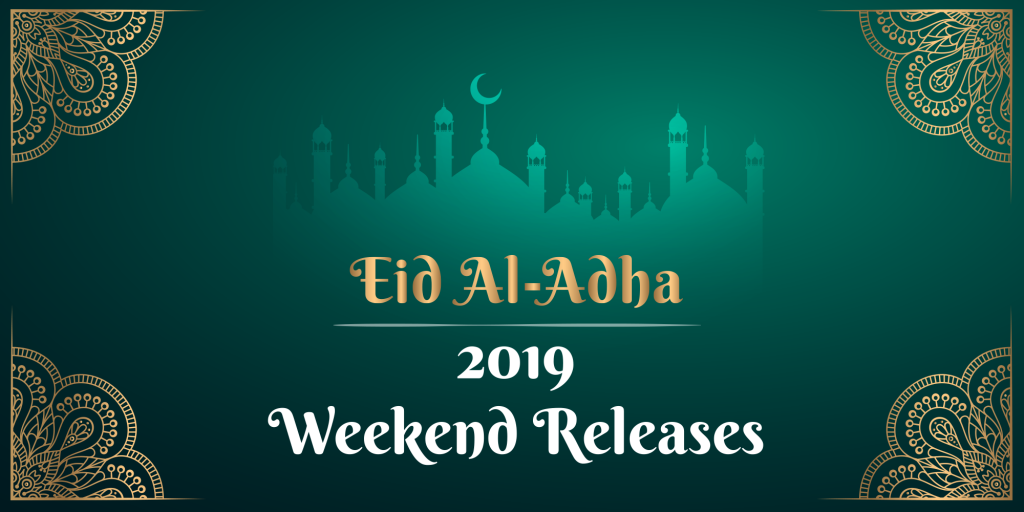 Eid Al-Adha ( also known as the ‘feast of the sacrifice’) is just around the corner – Saturday 10 August to Tuesday 13 August.

Whether jet-setting to a new holiday destination or staying back to catch up on some rest and relaxation, we have almost a week to enjoy at our leisure.

For those of you who will be doing the latter, there’s plenty to catch at the cinema over the long weekend ahead.

From a human-dog friendship to a groom kidnapping and the fight for justice after sexual assault, here’s a list of movies releasing over Eid Al-Adha:

The Art of Racing in the Rain

Based on the best-selling novel by Garth Stein, The Art of Racing in the Rain is a heartfelt tale narrated by a witty and philosophical dog named Enzo (voiced by Kevin Costner). Through his bond with his owner, Denny Swift (Milo Ventimiglia), an aspiring Formula One race car driver, Enzo has gained tremendous insight into the human condition and understands that the techniques needed on the racetrack can also be used to successfully navigate the journey of life. The film follows Denny and the loves of his life – his wife, Eve (Amanda Seyfried), their young daughter Zoe (Ryan Kiera Armstrong), and ultimately, his true best friend, Enzo.

When gangster husbands wind up in prison in the 1970s, their wives take over their organization and become Hell’s Kitchen’s most powerful mobsters.

The flightless angry birds and the scheming green piggies take their beef to the next level in The Angry Birds Movie 2! When a new threat emerges that puts both Bird and Pig Island in danger, Red (Jason Sudeikis), Chuck (Josh Gad), Bomb (Danny McBride), and Mighty Eagle (Peter Dinklage) recruit Chuck’s sister Silver (Rachel Bloom) and team up with pigs Leonard (Bill Hader), his assistant Courtney (Awkwafina), and techpig Garry (Sterling K. Brown) to forge an unsteady truce and form an unlikely superteam to save their homes. Directed by: Thurop Van Orman

Scary Stories to Tell in the Dark

It’s l968 in America. Change is blowing in the wind…but seemingly far removed from the unrest in the cities is the small town of Mill Valley where for generations, the shadow of the Bellows family has loomed large. It is in their mansion on the edge of town that Sarah, a young girl with horrible secrets, turned her tortured life into a series of scary stories, written in a book that has transcended time stories that have a way of becoming all too real for a group of teenagers who discover Sarah’s terrifying home.

The dramatic story of the cutthroat race between electricity titans Thomas Edison and George Westinghouse to determine whose electrical system would power the modern world.

A weathered Lieutenant, his police force, and a local vigilante are all caught up in a dangerous scheme involving a recently arrested, troubled man who’s linked to years of female abductions and murders.

A solo sailor is locked inside the head of a sailboat which is under steam on autopilot.

Jabariya Jodi is a story of vindication and realisation of love between the bold & unapologetic Babli with the quintessential stud of Bihar, Abhay. Set in Bihar, it explores the unusual phenomenon of forced weddings with humorous undertones and comical events. It’s a love story that knows no bounds and which cannot be forced or arranged or bought with dowry.

When three young women are implicated in a crime, a retired lawyer steps forward to help them clear their names. Nerkonda Paarvai is an upcoming Indian Tamil-language thriller film, written and directed by H. Vinoth and produced by Boney Kapoor. It is a remake of the Hindi film Pink

Tovino Thomas is all set to don the khaki and boots for his first “out-and-out mass role” in the movie Kalki. The movie revolves around the story of fearless Police officer who takes charge of a village to fight against a political party ruled by ruthless rowdy Amarnath. The Arrival of the new SI boosts the morale of the submissive police department & the people of village. The whole power dynamic in the village begins to change. In a series of events, the SI tries to dethrone Amarnath from his position by destroying his team. And here starts the tension between both of them. Finally the SI triumphs by uniting with the migrants, who were evacuated from the village by Amarnath. SI leaves town to find his next mission with the satisfaction of accomplishing his mission. Watch how SI fights Amarnath and his evil activities..

Margamkali is a romantic comedy starring Sachithanandan (Bibin George) in the lead who has an innate talent to write beautiful love letters. Women swoon for his letters despite his average physical appearance. His love letters end up being read by the lead actress Urmila (Namitha Pramod) and the interesting turn of events form the rest of the story.

Jaison (Mathew Thomas) is a higher secondary student, who initially gets admitted to the Humanities stream. But, he later switches to the Science batch and falls in love with his new classmate, Keerthi. He is annoyed with Keerthi’s admiration for their new Malayalam teacher Ravi Padmanabhan aka Ravi sir (Vineeth Sreenivasan). How Jaison wins Keerthy’s love forms the crux of the story.

Ambili suffers from Down’s syndrome. The story traces Ambili’s outlook towards life and of challenges others surrounding him that face him on an everyday basis.

Will a man who constantly runs away from relationships finally find the one who steals his heart forever?

Superstar is the story of two characters from different worlds as they journey to find the true meaning of the word ‘Superstar’. Noor a budding actress who wants to make it big in the film industry meets Sameer a celebrity with stardom. Together they learn the price of success and that sometimes to shine, you need the darkness. Starring Mahira Khan and Bilal Ashraf, this tale of love and romance shows that everyone has the right to dream.

The story takes place three years after the events of the first part,as the four brothers tried their best to keep the promise they took to stay away from the life of crime. But one event takes place that changes all that and makes them enter new worlds and puts them face to face with dangerous criminals.

In the bustling high of cramped Hong Kong, two OFWs are destined to change each other’s lives forever. JOY is a spunky poor millennial who works as a domestic helper in Hong Kong. While she excels in her job and enjoys the friendship of many other empowered domestic helpers, she plans to leave the city soon. Hong Kong is only her stopover. Determined to live a greater life far from her depraved childhood, Joy has big dreams of succeeding in Canada or wherever her dreams may take her. In her journey to achieving her goals, Joy meets Pinoy bartender ETHAN. Ethan is a sweetheart playboy already building a permanent life in Hong Kong. In a few years, he will officially become a resident in the city. After escaping responsibilities all his life, Ethan now wants to commit to a career and to his family (who also reside in Hong Kong). Joy and Ethan soon develop a friendship. The two become each other’s joy against the grime and grind of Hong Kong. So much so that when lonely nights come, they fully surrender to each other’s comfort. Still, they warn each other: this is just “for now”, we are not permanent. Nonetheless, as they overcome more and more problems in Hong Kong together, Joy and Ethan’s love deepens. They become each other’s savior—helping one another mend their lifelong wounds and realize their ambitions.  They wonder, can their “for now” turn to forever? But what happens when Joy’s dreams take her away from Hong Kong? How can their love possibly survive?

After taking charge as the DSP of Singham Khurd, Dilsher Sikhon sets out to end the drug addiction among the youth of Punjab. This sets him against Bhuller, a vicious business tycoon with connections in high places.

Audiences – Don’t miss out on treating yourself to a few movies over Eid Al-Adha and have an entertainment filled long weekend!

Advertisers – In recent years, cinema admissions over the weekend of Eid Al-Adha are higher on comparison to some other weekends within a respective year. Contact us for cinema advertising opportunities alongside any of the movies above.