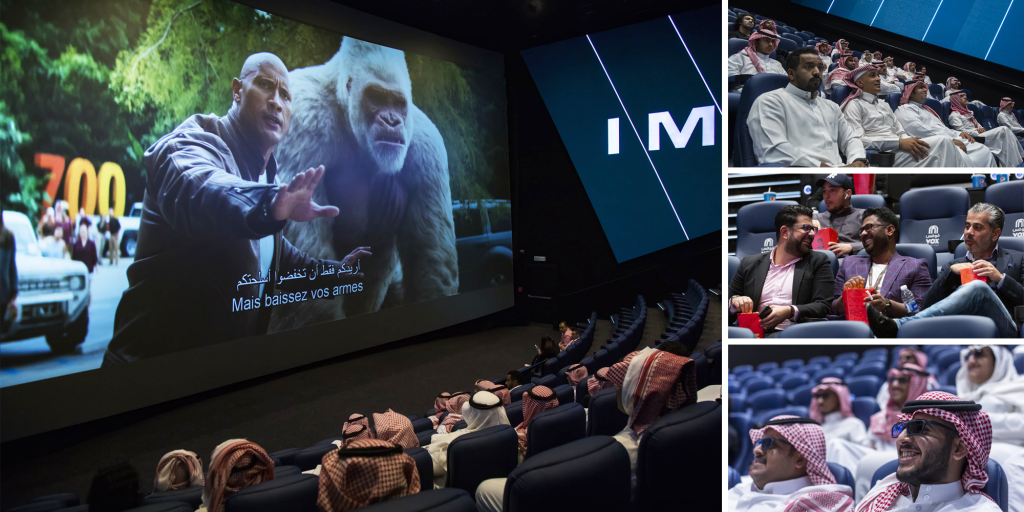 While box office returns in 2020 will suffer an estimated 80% global drop due to COVID-19, the Kingdom of Saudi Arabia is bucking this downward trend, having grown since 2019 to become the Middle East’s top grossing territory this year to date.

Fresh figures released during the recent META Cinema Forum exhibitors’ conference in October reveals that the Kingdom has overtaken the United Arab Emirates this year, and is currently the region’s top-grossing territory, with more than $73 million in theatrical movie ticket sales over the past 40 weeks – a roughly $2 million increase in box office returns compared with the same period in 2019.

The UAE during the same 2020 period has generated roughly $51 million, roughly a quarter of its 2019 box office draw.

Commenting on the growth of the theatrical market in KSA, Cameron Mitchell, CEO of VOX Cinemas says: “We believe that Saudi Arabia is the only cinema market globally to have expanded in 2020.”

Mitchell sees the Saudi market as having increased by roughly 4% year to date – despite the fact that, due to the pandemic, cinemas where closed between March and the middle of June – and is forecasting an 8% growth by year’s end.

The theatrical market in the Middle East in 2019 was worth $600 million, of which Saudi accounted for a $110 million share and the UAE roughly $250 million – which excludes releases of Indian and Arabic films and some indie content. “This year our numbers are telling us that the UAE is going to be worth about $60 million, and Saudi is going to be worth $120 million,” says Mitchell.

In terms of the bigger picture, Mitchell believes that Hollywood will value the Middle East at about $220 million in 2020 out of which KSA will contribute to 50% of the same this year.

David Hancock, an analyst at London-based Omdia says, “The fact that Saudi has now overtaken the UAE, albeit in a weird year, is suddenly a milestone for the Saudi Arabian cinema market.” Hancock expects the country will be a billion-dollar market “in 3 to 5 years,” depending on recovery from COVID-19 which he estimates this year will cause an 80% global box office drop, with losses totaling up to $30 billion. He also mentioned that KSA is on track to become the dominant market in the region “and one of the top 10 or 15 markets in the world.”

An interesting aspect of Saudi Arabia’s current box office upswing is that grosses in the country are currently generated from a mere 260 screens – less than half the 614 screens operating in the UAE. Average occupancy levels in cinemas across the Middle East have not gone beyond 20%, and Saudi is no exception. However, in terms of generating box office, KSA has the cushy advantage boasting of an average ticket priced at $17.60, which is the highest in the region followed by UAE figure which is $12.80, and Kuwait, the region’s third market, priced at $11.90.

Meanwhile, screen growth in Saudi Arabia is going forward undeterred, with VOX presently operating 124 screens across 11 locations. Aside from VOX Cinemas, other cinema exhibitors operating in the Kingdom include Muvi Cinemas and AMC Cinemas who have 10 and 6 operational cinemas respectively, and are in the midst of massive expansion plans over the year ahead.

Having a market like Saudi Arabia can help Hollywood studios offset some of their losses, says Mitchell, who is worried that due to COVID-19, the supply chain is drying up. To overcome the challenge posed by the lack of new content, VOX is stepping up its offer of alternative content such as live soccer matches, opera and concerts, and also classic re-releases. VOX has also teamed up with local players Image Nation and MBC Group to produce a slate of Arabic films, at least three of which they plan to release in 2021 as part of a plan to release up to 10 Arabic self-produced titles annually.

Mitchell is confident the country will become a top ten global market for cinema, with ResearchAndMarkets.com forecasting the industry in the Kingdom will be worth more than $1.2 billion by the end of 2030.