With the reopening of cinemas in most states of India, Asian movie lovers will witness the return of the much anticipated movie releases on the big screen, that were previously pushed back due to the ongoing pandemic.

Cinema theatres in India and overseas markets popular for Indian movie releases, are anticipating heavy footfall during the Diwali weekend, which falls on 4 November 2021, for the line-up includes both regional and big-ticket titles.

From Akshay Kumar’s Sooryavanshi, Rajinikanth’s Tamil movie Annaatthe and more, here is a comprehensive list of Asian movie releases over the remainder of 2021:

Synopsis: Prithviraj plays Dr Derrick who tries to unearth the mystery in the story. The mystery of star – the Betelgeuse in the Orion constellation.
Release Date: 28 October 2021
Cast: Prithviraj Sukumaran, Joju George and Sheelu Abraham

Synopsis: Bunty and Babli are forced out of retirement after a spate of robberies with their trademark sigil start appearing across India.
Release Date: 18 November 2021
Cast: Saif Ali Khan, Rani Mukerji and Pankaj Tripathi

Synopsis: Revolves around the fight against injustice and misuse of power. From police and politicians to industrialists and a common man, the film will explore corruption in all spheres.
Release Date: 25 November 2021
Cast: John Abraham, Divya Khosla Kumar and Anup Soni

Synopsis: On the day of a public conference by the state’s Chief Minister, his bodyguard and a police officer are stuck in a time loop.
Release Date: 25 November 2021
Cast: T.R. Silambarasan, Kalyani Priyadarshan and S.J. Suryah

Synopsis: The about a thirty six year old cricketer who stopped his cricketing career ten years ago, and now aiming to return to the Indian Cricket team to realize his son’s dream and to prove his ability
Release Date: 30 December 2021
Cast: Shahid Kapoor, Mrunal Thakur and Palak Singh

Advertisers… here’s your chance to target Asian audiences in the lead up to Diwali and over the rest of Q4 2021. Mark your calendars and contact us to plan your cinema advertising campaigns alongside these Asian movie releases.

With a movie budget of USD 4.83 million, Roohi is Bollywood’s first big film this year

Due to the on-going COVID-19 pandemic, last year witnessed a majority of Bollywood blockbusters either pushing their release dates, or releasing on OTT platforms. Indian blockbusters such as Gunjan Saxena: The Kargil Girl, Dil Bechara and Shakuntala Devi opted for the later in 2020, with Laxmii  featuring Akshay Kumar being the only Bollywood blockbuster to release in hybrid format – Disney+Hotstar release in India and a simultaneous theatrical release in Australia, New Zealand, Fiji, Papua New Guinea and UAE. The theatrical release of Laxmii was successful, especially in the UAE where it made a total of USD 200,000, but the latest horror comedy film Roohi – by director Hardik Mehta, which went straight to cinemas both locally and internationally, has taken the top spot at box office since the pandemic, with a collection of USD 345,000 on its first day in India – despite most theatres still operating between 50-75% occupancy. According to boxofficeindia.com, its total collection thus far has been USD 2.26 million domestically, and USD 150,000 internationally.

As stated by Chauhan, a local exhibitor from Bihar, India: “Before Roohi‘s release, we would have no idea how much a film would do in these pandemic times. We would look at each other’s faces wondering how much a film would earn at the box office. But now we have a benchmark. And Bollywood needed this dose of confidence.”

Girish Johar, film producer and trade business analyst, pointed out that Roohi has witnessed a good response at the box office despite being one of the first big Indian films to release post theaters being opened. With Roohi seeing strong footfalls, exhibitors in India are now hopeful for business to slowly get back on track.

Roohi‘s opening day numbers will set the stage for the extensive line up of highly anticipated Bollywood blockbusters set to hit the big screen in 2021, including Mumbai Saga (March), Bunty Aur Babli 2 (April), Sooryavanshi (April), Radhe (May), Bell Bottom (May), 83 (June), Maidaan (October) and Laal Singh Chaddha (December) among others.

Having experienced huge losses due to the COVID-19 induced lockdown in 2020, the Indian cinema industry is relatively back on track, with 2021 looking hopeful for Indian movie fans across the world. Here’s a comprehensive list of Indian language blockbusters, confirmed to release in cinema, that will set the BIG screen ablaze this year!

Among most things we didn’t get to do in 2020, was the joy of visiting a cinema to enjoy the experience of watching a blockbuster on the BIG screen. While the cinematic release for numerous Hollywood blockbusters remain delayed in 2021, the Indian cinema industry is relatively back on track, offering cinemagoers an extensive line-up of blockbusters across an array of genres.

Here’s a comprehensive list of all the Indian movies, confirmed to release in cinema, and worth experiencing on the BIG screen: 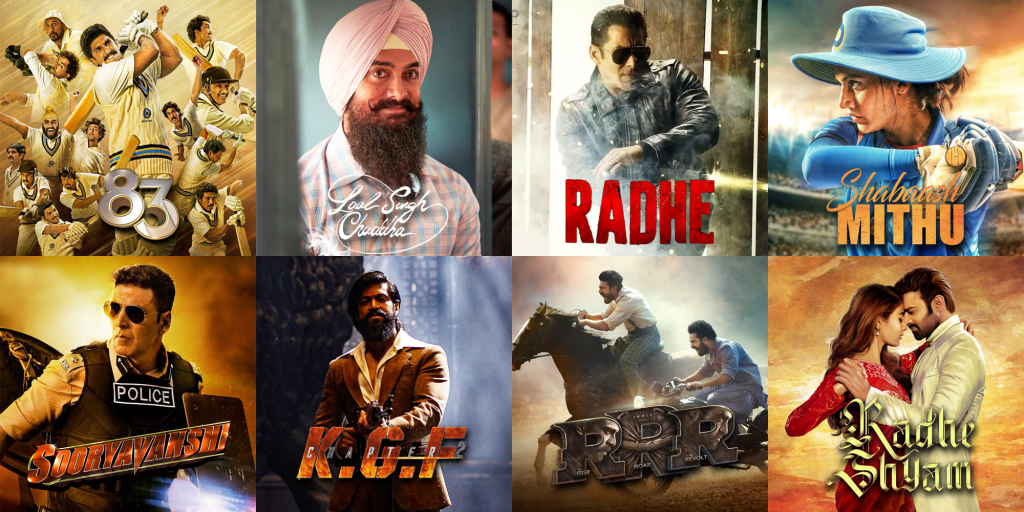 Directed by Kabir Khan and starring the real-life pair, Ranveer Singh and Deepika Padukone lead roles, ’83 is a movie based on India’s historic first World Cup win in 1983. The movie is a combination of two things Indians love the most – Bollywood and Cricket!

Starring Aamir Khan in the lead and directed by Advait Chandan, Laal Singh Chaddha is an official adaptation of Tom Hanks’ Forrest Gump. The movie will be Aamir Khan’s return to the big screen after a three year hiatus, post Thugs of Hindostan.

The actor-director duo, Salman Khan and Prabhu Deva, are set to return to the big screen this year with Radhe – a movie inspired by the South Korean hit The Outlaws. The Bollywood action-drama is set to release later this year.

Based on the Indian Women’s Cricket team captain, Mithali Raj, the biopic stars is directed by Rahul Dholakia and stars Taapsee Pannu in the lead role. The movie is said to highlight the achievements and struggles of the skipper and her journey to realize her childhood dream.

An addition to director Rohit Shetty’s own Cop Universe, this installment features Ranveer Singh, Katrina Kaif and Ajay Devgn. The action packed movie is based on the anti-terrorist squad lead by DCP Veer Sooryavanshi who joins forces with the Mumbai Police, headed by Inspector Sangram Bhalerao and DCP Bajirao Singham, to stop a terrorist group planning an attack on Mumbai.

In the follow-up to the 2018 blockbuster directed by Prashanth Neel, South Indian star Yash resumes his role as Rocky, while Bollywood star Sunjay Dutt makes his Kannada acting debut as Rocky’s nemesis. Raveena Tandon will also feature in the movie as a political leader named Ramika Sen. This blockbuster is also set to release in Tamil, Telugu, Malayalam and Hindi.

Directed by S. S Rajamouli, the movie stars Jr. NTR, Ram Charan and Alia Bhatt in lead roles. The action-drama is a fictitious story about two legendary revolutionaries and their journey away from home before they started fighting for their country in 1920’s.

Billed as a political satire, the film is written and directed by Anudeep K V. Jathi Ratnalu stars Naveen Polishetty, Priyadarshi Pulikonda and Rahul Ramakrishna in the lead roles. The movie is set to release in cinema on March 11.

Starring Sharwanand and Priyanka Arul Mohan in lead roles, the movie is set in a rural backdrop is written and directed by Kishore Reddy. The film will release on March 11.

The Telugu remake of Bollywood hit Pink is helmed by Venu Sriram. In the remake, Pawan Kalyan steps into the shoes of Amitabh Bachchan. Vakeel Saab also stars Anjali, Nivetha Thomas, Ananya Nagalla and Prakash Raj  and is slated for release on April 9.

Other Indian movies releasing in 2021 include: