From joining the quest of destroying that ‘One Ring’ – Lord of the Rings, drifting into the realm of ‘Narnia’- home to mythical beasts and talking animals – The Chronicles of Narnia, to learning the art of witchcraft and wizardry at ‘Hogwarts’ – Harry Potter and coexisting with the local tribe on the lush alien world of Pandora – Avatar, we can all agree that fantasy is fundamentally ridiculous. But, once in a while, the real world gets a tad boring, and good old fantasy is our best and cheapest bet!

Fantasy has the power to transport audiences from the bounds of reality into the world of escapism and incredulity – and what better medium than cinema to escape reality (larger than life image and surround sound with booming bass).

Over the years, the genre has gone from strength to strength, and today, we’re in the middle of an unprecedented fantasy boom.

Justice League – Ran for 8 weeks and did approximately 322K admissions

Star Wars: The Last Jedi – Ran for 9 weeks and did approximately 178K admissions

Doctor Strange – Ran for 10 weeks and did approximately 245K admissions

Warcraft: The Beginning – Ran for 9 weeks and did approximately 182K admissions

Cinderella – Ran for 12 weeks and did approximately 303K admissions

*Fantasy movies mentioned above are as per genre listings on IMDb.

Contact a member of our sales team for more information on advertising opportunities alongside upcoming fantasy movie releases.

The Power of a Film Franchise

If characters are the new movie stars, then the franchise is the new coin of the Hollywood realm. This is the POWER of a film franchise!

Movie studios live or die by how many franchises – connected universes, sequel factories and spin-off machines they have in their stable.

Research proves films that are part of a franchise continue to perform at the box office.

Two examples from this year: 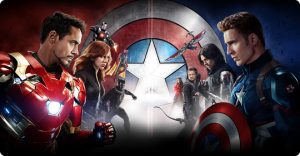 J.K. Rowling recently announced at a Warner Bros. event that Fantastic Beasts and Where to Find Them  (originally set as a trilogy) would now expand across five movies.

The first film is scheduled for release later this year, and the second film is already in the works (slated for release in November 2018). David Yates will be returning as director, with the script written by Rowling herself. Oscar winner Eddie Redmayne has signed on to play Newt Scamander in all of the five films.

Fantastic Beasts is a spin-off to the Harry Potter Universe which is one of the highest grossing franchises of all time with $7.7bn in global box office earnings.

With two of the year’s biggest titles still to come, Fantastic Beasts and Where to Find Them (Nov 17) and Rogue One: A Star Wars Story (Dec 15), expect even more box office records to be broken – both locally and internationally.

Advertise your brand alongside two of the most anticipated movies and well-known movie franchises. Contact a member of our Sales Team for more information on cinema advertising opportunities.