Anticipated Movies Releasing Over Summer in 2021 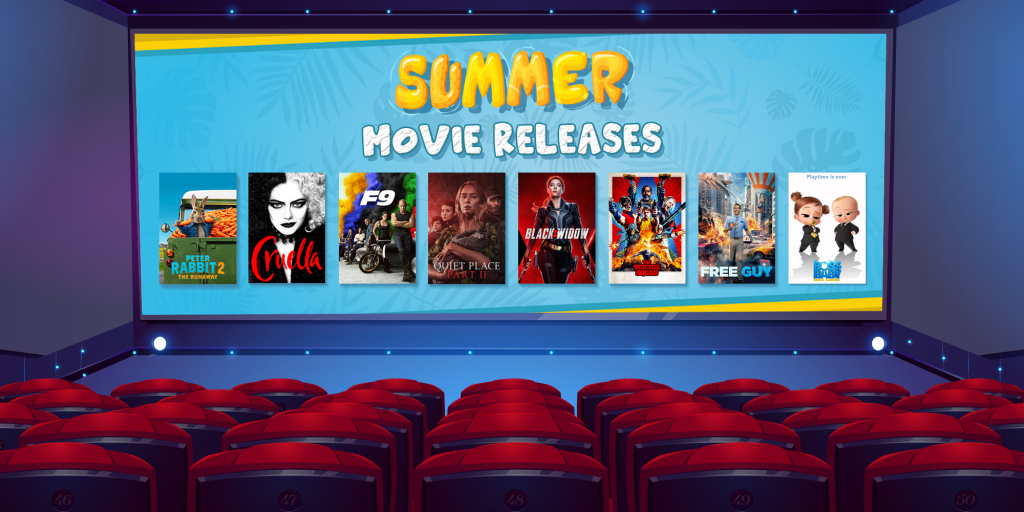 Here’s an extensive line-up of movies releasing in cinema over summer in 2021!

With the global rollout of the vaccine, cinemas in parts of the US now open and UK set to open its doors to cinemagoers in May, multiple production houses have now confirmed the theatrical release date for most movies postponed as a result of the pandemic, with cinema lovers now having lots to look forward to this summer.

Here’s a comprehensive list of movies set to hit the BIG screen this summer:

A sequel to the 2018 animation blockbuster, the second installment witnesses Peter Rabbit move to the big city upon finding the garden life redundant. However, not every sail must be smooth – he meets people from different walks of life in the big city and eventually ends up creating havoc for his family! Join Peter on this journey in a cinema near you on 13 May 2021.

The live-action movie stars Emma Stone as a young Cruella de Vil – the famous villain from ‘101 Dalmatians’. The story revolves around Cruella’s years as a fashion designer in the 70s, when she becomes obsessed with dogs’ skin – especially Dalmatians. The movie is set to release on the BIG screen on 27 May 2021.

Make way for the 9th installment in the Fast Saga! The plot of the movie centres on Dominic Toretto and his crew having to join forces to battle the most skilled assassin and high-performance driver they’ve ever encountered, who also happens to be Dom’s forsaken brother Jakob. Will Dom be able to save those he loves, or will he go down fighting? Find out on 25 June 2021.

The Conjuring 3: The Devil Made Me Do It

Real-life paranormal investigators Ed and Lorraine Warren are back with a chilling story of terror, murder and unknown evil. The third installment of the real-life inspired series revolves around the fight for the soul of a young boy, which leads to something that is unknown in U.S history – a murder suspect claiming demonic possession as a defense. The movie is set to releases in cinema on 3 June 2021.

The sequel to the 2018 blockbuster follows the events at the home of the Abbott family, who now face the terrors of the outside world. Compelled to resort to the unknown, the Abbott’s realize that the creatures that hunt by sound are not the only threat lurking beyond the sand path. Venture into the unknown with them on 10 June 2021 at a cinema near you.

The world’s most lethal odd duo – bodyguard Michael Bryce and hitman Darius Kincaid, have taken on another life-threatening mission – to save Darius’s wife Sonia. The trio get caught amidst a global plot only to find that they are all that stand between Europe and a vengeful and powerful madman. Join the fun deadly mayhem on 17 June 2021.

In Marvel Studios’ action-packed spy thriller, Black Widow, Natasha Romanoff confronts the darker parts of her life when a dangerous conspiracy with ties to her past arises. Pursued by a force that will stop at nothing to bring her down, Natasha must deal with her history as a spy and the broken relationships left in her wake long before she became an Avenger. This action-packed blockbuster resales on 9 July 2021.

The sequel to the 2016 Suicide Squad, is set to release across cinemas on 5 August 2021. The movie revolves around super-Villains Harley Quinn, Bloodsport, Peacemaker, and a collection of cons at Belle Reve prison who join the super-secret Force X. Heavily armed, they are dropped off at the remote, enemy-infused island of Corto Maltese where they must fight to live.

After multiple reschedules, this blockbuster starring Ryan Reynolds is set to release on 12 August 2021. The movie’s plot is based on a bank teller named Guy, who realizes he is a character in a video game that is soon going offline! Will he win the race against time to save the game before the developers can shut it down? Find out this summer.

A sequel to the 1992 horror film, Candyman makes a comeback to a reestablished neighborhood of Chicago where the legend began. A decade after the last of the Cabrini towers were torn down, Anthony and his partner move into a loft in the now gentrified Cabrini, unknowingly opening a door to a complex past that unravels his own sanity and unleashes a terrifying wave of violence. This spine-chilling thriller is set to release in cinema on 24 August 2021.

Once the booming home of pharmaceutical giant Umbrella Corporation, Raccoon City is now a dying Midwestern town. The company’s production plant has left the city as a barren wasteland with great evil brewing below the surface. A small group of survivors must work together to uncover the truth behind the crimes of Umbrella Corporation and make it through the night. Watch the eventful night unfold in a theatre near you on 2 September 2021.

The Templeton brothers have become adults and drifted away from each other, but a new boss baby with a cutting-edge approach is about to bring them together again – and inspire a new family business.

Other movies set to release over summer in 2021 include:

From action-packed blockbusters, hair-raising thrillers and a heap of light entertainment, the big screen is set to be your go to destination this summer.

Contact us to display your brand alongside these upcoming blockbusters on the BIG screen!

Welcome 2021 With the Feel-good Factor of Animation!