VOX Cinemas opened its newest location at Nakheel Mall on The Palm in Dubai on 28th November 2019.

The cinema is home to 15 state-of-the-art screens with a total of 923 seats, and includes Theatre by Rhodes and Kids cinema experiences. 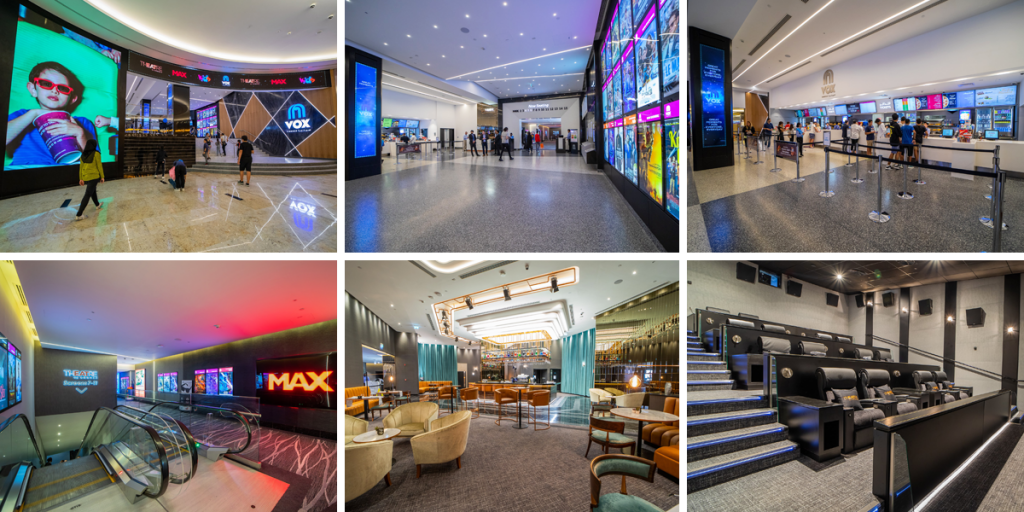 Nakheel Mall – a Dhs1.2bn project, is the latest addition to the Nakheel portfolio and brings a new level of shopping, dining and entertainment to the emirate of Dubai.

The mall is also the access point to The View at The Palm – a public observatory perched on the top of Palm Tower which is 230 metres above the island. The View is scheduled to open in 2020.

VOX Cinemas presently operates over 230 screens across 20 locations in UAE.

Motivate Val Morgan congratulates VOX Cinemas on its opening at Nakheel Mall and warmly welcomes this new location to our cinema circuit.

Contact us for more information on cinema advertising opportunities in UAE.

Ring in the Christmas cheer with these Seasonal Campaigns!

It is that time of year again, some say the most wonderful time of year. It’s also the time that many retailers put their hard-earned money in Santa’s sack, with Christmas campaigns tempting shoppers with stories of the season.

Not only is Christmas an ideal time to introduce brands to new customers, but it is the perfect reason to reconnect with existing shoppers.

As the festive season approaches we see more and more memorable adverts arrive on cinema screens to showcase what the big retailers have to offer – but which is the best Christmas advert for 2019?

Check out our compilation of popular and heartwarming Christmas ads from across the globe and decide for yourself!

The John Lewis advert marks the start of the festive season and this year’s offering will melt your heart – as well as the ice.

John Lewis’ 2019 Christmas advert is about a young dragon named Excitable Edgar. Edgar is a dragon living in a small town who can’t play with the other children at Christmas because his ‘firey’ breath keeps melting all the snow.

The grown-ups also begin to turn on him when he accidentally sets fire to the town’s Christmas display.

But with a bit of ingenuity, one local girl proves that Edgar’s fire can prove useful after all.

This festive ad is full of everything we expect of Christmas – from red sequined dresses to elves and even Mariah Carey! Walkers have pulled out all the stops for their Christmas campaign and have called it their “biggest ever Walkers Christmas advert”.

The advert comes on the 25th anniversary of Mariah’s 1994 album Merry Christmas. And it’s said to have cost the retailers a whopping £9million to have her face on 50 million packets of crisps.

Tesco’s Christmas advert features a delivery driver travelling through time in a Back to the Future influenced celebration of the company’s 100th anniversary.

The UK’s largest supermarket has kept its festive advert closely under wraps and sent social media into a frenzy when a Tesco van was spotted on top of a house in Cheshire, England.

Tesco is the last of the major retailers to release their advert, which they have said is intended to highlight its role ‘delivering Christmas to the nation for the past 100 years’.

In the ad, a Tesco delivery driver called Joel, is transported with his van full of food to various years throughout the past century, after his van gets caught up in Christmas lights.

Visa‘s Christmas advert calls on shoppers to support the UK high street in the face of struggling sales and an increase of online shopping.

Visa said the message is to encourage shoppers to think more about where they’re buying from.

Sainsbury‘s heartwarming Christmas advert tells a story of how Santa started out as a chimney sweep who was accused of stealing a clementine.

The retailer is marking 150 years in the business and so has set its festive ad outside the first Sainsbury‘s store in Drury Lane in 1869.

Sainsbury‘s says that the tale is a “totally true story” but in reality “Nicholas” has been created in the spirit of Christmas and there’s no real evidence of the retailer’s founders ever having saved a child in this way.

The ad is directed by award winning Ninian Doff, who has also directed a handful of commercials for brands such as Hula Hoops, 02 and GiffGaff.

Aldi has used Kevin the Carrot for the fourth year in a row in its Christmas advert.

New character Russell Sprout, and his Brummy gang of “Leafy Blinders“, are boiling with rage about Kevin and his family of carrots stealing the show as the star Christmas vegetable.

The sprouts are dressed in tweed caps, much like characters from popular Netflix drama – Peaky Blinders.

Tiny Tom – a little tomato – comes to Kevin’s rescue after the sprouts tie him up.

Amazon – The Singing Boxes are Back!

Amazon‘s Christmas ad features a whole host of people singing and dancing to Solomon Burke’s classic track, “Everybody Needs Somebody to Love”.

The heartwarming, feel-good advert shows families, friends, colleagues and strangers from all walks of life coming together while singing and dancing along with the cheerful Amazon boxes.

At the same time, people are giving or delivering gifts to loved ones that are, of course, inside Amazon boxes.

Boots shows customers how to get presents for the most difficult loved ones in your life.

The ad introduces Boots’ new range of in-store gift edits – called “Bootiques” – there to take the hassle out of Christmas shopping.

There will also be an online option to create your own Bootique so you can hint to loved ones what you want this Christmas.

Asda’s festive campaign is all about making Christmas extra special – but there’s a heartwarming story behind its advert.

The ad follows a young girl – Tilly – inspired by stories from her Grandad about Santa’s leftover magic.

The advert focuses on people who go the extra mile during the festive season, making it a special time for all.

The best thing about Christmas is obviously knitwear, and that’s something Marks and Spencer has tapped into brilliantly for their latest ad. Directed by Jake Nava, the director behind Beyoncé’s Single Ladies video, this promo will have you jumping around with your jumpers in no time at all.

The pair are seen at a snow-covered “M&S Food Christmas Market” where they sample festive treats at different stalls.

Other famous faces that appear in the market include popular television presenters Amanda Holden and Rochelle Humes.

Very – Get More Out of Giving

Very.co.uk showcased an emotional advert which celebrates the joy of community as stars from previous years returned to the tv screens.

It follows the residents of Chester Street as they give up their time to make sure their elderly neighbour Sidney isn’t alone at Christmas.

It is accompanied by a cover of Rudimental’s 2012 hit Feel The Love recorded by The Social Singing Choir.

The 90-second advert follows the animated journey of Ellie who is at home and eager to play a game of ‘reindeers’ with her older sister Jenny – only Jenny is uninterested in playing games with her younger sister and slams the bedroom door on her.

Celebrate the magic of Christmas through the eyes of Ellie, in this advert which illustrates scenes recognized by parents across the world, as the whole family comes together to get Reindeer ready.

Don’t miss out on your chance to target consumers this festive season! Contact us for cinema advertising opportunities alongside blockbuster movies at the cinemas and spread the festive cheer.